You are here: Home / The territory / History

Inhabited since prehistoric times, in this area there have been Ligurians, Romans, Byzantines and Lombards. Before the year thousand in its

territory was Verabolo, the site of a Roman and then ‘pago’ Byzantine. Before the Lombard conquest, in the Byzantine era, the local church, organized around the ancient parish church of San Vitale, was dependent on the bishop of Ravenna and not from that of Reggio. Along the ridge Valestra Fosola probably was the limes, that is the border between the territories subjected to Byzantium and the Lombards. Hornbeam was particularly important at the time of Matilde di Canossa, Marchioness of Tuscany and last representative of the dynasty of Attoni (cadet branches of the same family, or simple vassals bearing the same surname, continuing in families Iattoni / Jattoni in nearby Val Parma). In the Castle of Carpineti still exists, located on the crest of Fosola-Valestra – from which you can enjoy the view over the valley of the Secchia and the Tresinaro – it took place on the “Conference of Carpineti” of 1092, during which the ecclesiastical and allies of Matilde discussed peace proposals of Henry IV. The countess, also encouraged by the vehement words of the hermit John of Marola, reached the decision to persevere in the struggle against the emperor, who was defeated and finally humiliated in nearby Canossa. The dissolution of Matilda territories following the death of the Countess, Carpineti passed to several lords. In the thirteenth century, he swore allegiance to the Municipality of Reggio, although loyalty to the city of the plain was often questionable. In particular it is to remember the story of the robber Domenico Amorotto that spadroneggiò in the mountain area for many years. From the sixteenth century it became part of the Este Duchy of Reggio, which shared the fate until the unification of Italy. The idea to dedicate this event to a robber came to us in order to give prominence to the country and to its surrounding areas through a particular figure and not inflated. 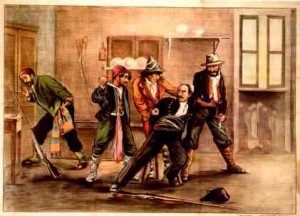 Domenico Amorotto (Carpineti? … – Toano, July 5, 1523) was an Italian brigand. It was one of the most notorious bandits of the sixteenth century. and he worked mainly in the Apennines of Modena and Reggio Emilia and the Garfagnana. Born Domenico de’Bretti, it is considered a figure almost legendary in the mountains of Reggio Emilia, and for many years was the obsession of Francesco Guicciardini, at the time the papal governor of Reggio. He went into hiding in his youth, according to some chronicles, after killing an enemy with a knife in the square in Carpineti, and gathered a band of men with outstanding accounts with justice. His “career” started at the local squires service that made use of it for small revenges, then with his father and brothers and Alessandro Vitale, went to Pope Julius II service when, in 1512, they took possession of Reggio. Had the castle of Carpineti with the right to recover the duties in the country, and these privileges were also confirmed by the Pope Leo X. Guicciardini, rose in 1517 to the government of Reggio, despite repeated diplomatic and military efforts, had to fight for several years without obtaining the removal from office of the mountaineer. main enemy of Domenico Amorotto was for many years Cato from Castagneto, a partisan of the Duke Alfonso I d’Este and other figure midway between the bandit and mercenary. On the death of the Pope, all the bands that were operating in Modena and Reggio Emilia mountain rose. So the last war broke out between the From Castagneto and Amorotto that killed the rival treacherously in Fanano castle. He broke so bloody revenge between the two bands, with frignanesi led by Virgilio from Castagneto, brother of the deceased leader, and assisted by the Este on one side and the Amorotto and his brothers on the other. The massacres and looting continued until the Amorotto was wounded by Virgil in a clash at Montese and, while trying to repair Carpineti, was killed in the village of Corneto, as Tybalt Sessi and Antonio Pacchioni, allies from Castagneto. His head and one hand were exposed in Spilamberto fortress and Guicciardini (whose role in the affair is not clear) took advantage of this death to eradicate the gangs in the Reggio mountains. Just outside Civago, a hamlet of Villa Minozzo (RE) a ruin, badly damaged by the earthquake of 1920, is called Torre dell’Amorotto because it probably was one of his shelters.